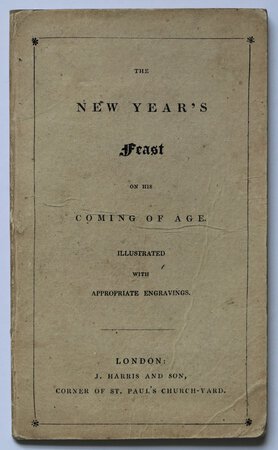 THE NEW YEAR’S FEAST on his Coming of Age.

London: J. Harris and Son, 1824. 24 pages, plus booklist pasted to rear inner recto of rear board. Illustrated with 12 hand-coloured engravings on six plates. Original printed card covers. 179 x 108 mm. First and only edition. Lower outer corner of front board a trifle bumped and with a crease mark; rear ad’s leaf should be loose but has been pasted down by a previous owner; else a very good, clean/fine copy of a rare title contained in morocco gilt slipcase. Moon 576. ‘This is mainly a versification of a prose composition by Charles Lamb, signed ‘Elia’s Ghost’, which appeared in the London Magazine for January 1823. The poem described a banquet at which all the days of the year attended, accompanied by Feast and Fast Days, Rainy Days and ‘their sun-shiny friends’.