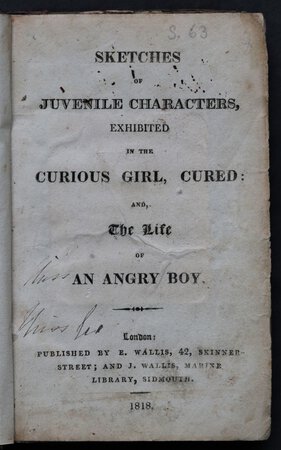 SKETCHES OF JUVENILE CHARACTERS, Exhibited in the Curious Girl, Cured: and, The Life of an Angry Boy.

London: E. Wallis, 42, Skinner Street; and J. Wallis, Marine Library, Sidmouth, 1818. 72 pages, including three of ad’s. Illustrated with five full-page hand-coloured plates. Bound with: SOPHIA AND MARY; or, the Sisters: An Interesting and Instructive Tale. London. E. Wallis, 42, Skinner Street. 1818. 84 pages, including 4 of ad’s. Illustrated with six hand-coloured full-page plates. The two works bound together as one in quarter sheep gilt over marbled boards, titled on spine ‘Characters’. Both titles have been well used and have some spotting and marking and some incidental damage. Both frontispieces have been relocated within their respective books; that of the second work has been laid down; ownership names on pastedown; front endpaper replaced; else a good pair of two extremely scarce titles Marjorie Moon’s copy with her bookplate. ‘Sketches of Juvenile Characters presents the reader with two cautionary tales. In the first, 'The Danger of Listening at Doors; or the Curious Girl Cured', there is none of the deliberate humour that would be employed in Heinrich Hoffman's Struwwelpeter or Hillaire Belloc's Cautionary Tales, but nevertheless the tricks played on the unhappy protagonist to shame her out of her crime are clearly designed to be amusing, even if they can seem now to verge on psychological abuse. Emma is insatiably curious. Despite many lectures from her mother, she cannot refrain from spying on others whenever the opportunity arises. In an attempt to reform her, her mother takes Emma walking in Kensington Gardens, and when, inevitably, Emma's attention wanders from her mother's botanical lessons to the conversation of those around her, her mother leaves her there, alone in the park. Emma is puzzled, then frightened, then ashamed. After humiliating encounters with the promenaders in the park, she finally finds one of her family's servants who has been ordered to watch Emma's steps, and he conducts her home where his mother is waiting to rebuke her. But the plan fails, for soon Emma is back to her old tricks. This time it is her brothers who attempt to reform her. Hearing her eavesdropping on them, they shut the door at which she is listening, deliberately trapping her frock. Her only alternative being discovery, Emma has to wriggle out of her clothes and return to her room, but even though she runs into a gardener as she is doing so, she is still not purged of her curiosity. Finally, at a ball her mother has thrown, Emma is caught spying at the key-hole of her brothers' room. Her elder brother writes in charcoal 'Curiosity Insatiable' above the key-hole, knowing that Emma will try to look through once again. She does, and the words become imprinted on her forehead. She attends the ball in this state, only discovering her shame when she checks her head-dress in the mirror. Mortified she retires from the ball, but by the morning she has reflected on her folly, and as well as thanking her brother as her best friend, she vows nevermore to succumb to her curiosity. The second tale, 'Henry Phillips; or the Life of the Angry Boy', is part school story, part Newgate chronicle, and part cautionary tale. Henry is indulged by his rich parents, especially his mother, and as a consequence is querulous, quick to take offence and quick to fight with his peers. His time at home, and at his first school, is marked by his inability to get on with any other children. This is also the case at the second school he is sent to, but there he falls in with bad company, and becomes even more addicted to bullying the other children. Brown, his only friend, is the biggest boy in the school, and offers protection to Henry, so that he never has to court the good opinion of the other boys and therefore never needs to reform his behaviour. When Brown leaves the school, Henry is subject to the contempt of his school fellows, but he is able to endure it and leaves at the earliest opportunity to become a soldier. In the days before he is to report to his first posting, Henry bumps into Brown, and they play at backgammon. A tendentious move having been made, they fall to quarrelling, and Henry's angry nature, joined with his pride in his new profession, actuates him to stab, and kill, his former friend (pictured opposite p.60). He is taken prisoner and put on trial for murder. Within a few days, he is sentenced and executed. His mother, hearing the news, dies. And all this because he refused to regulate his quick temper.’ From the Hockliffe Project website.