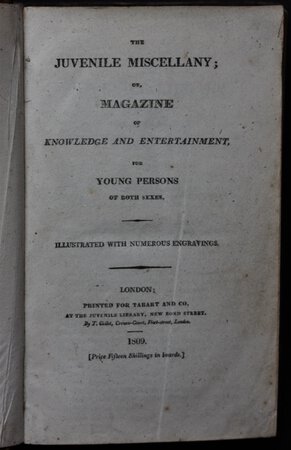 THE JUVENILE MISCELLANY; or, Magazine of Knowledge and Entertainment, for Young Persons of both sexes. Illustrated with numerous engravings.

London: Printed for Tabart and Co. at the Juvenile Library, New Bond Street, 1808. [Price Fifteen Shillings in boards.]. Title, 758, [1 list of Plates], [1 notice concerning the cessation of the Magazine after one volume], [6 Index] pages. Illustrated with twenty-two engraved plates, of which many are folding. Contemporary half untitled plain calf over marbled paper-covered boards. Original published in twelve monthly parts, commencing October 1808 and ceasing publication in September 1809. Lacks five plates, and many of the surviving plates have been washed and repaired. This is Lawrence Darton’s copy, and bears his notes concerning collation on the front pastedown. The plate list calls for twenty-one plates, but in actual fact there should be twenty-two, that concerning the eye, facing page 353, which is present in this copy, being omitted from the list. Mrs. Moon, Benjamin Tabart’s Juvenile Library, item 84, could trace only one copy in a private collection in Miami, which she describes as having twenty-three plates, but this is a mistake, as the two anatomy plates should really be counted as one. Also, the Miami copy would appear to lack the Index. Worldcat lists only the copy in the Cotsen collection of children’s books at Princeton, which has one leaf in facsimile and would appear to lack three plates. Regardless of its faults, this is a considerable rarity.