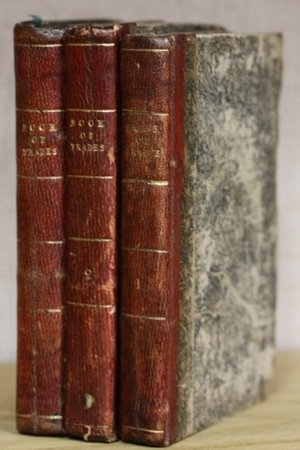 THE BOOK OF TRADES, or Library of the Useful Arts. The second edition.

London: Tabart and Co, 1805. Part I illustrated with twenty-three copper-plates. Part II, illustrated with twenty-four copper-plates. The second edition. Part III, illustrated with twenty-four copper-plates. First edition. All three volumes bound in original quarter red calf over marbled boards. All three with the ownership inscription: ‘Susanna Powell Christmas Day 1805.’ Some browning and foxing here and there – four leaves in volume one spotted; boards rubbed and worn at edges; tiny nick from the spine of volume III; else a very good set of this title, probably the most successful of Tabart’s productions and rarely found complete; or, if complete, invariably having been made up from various editions and odd volumes. The first two volumes were published in 1804. See Moon. page 155.