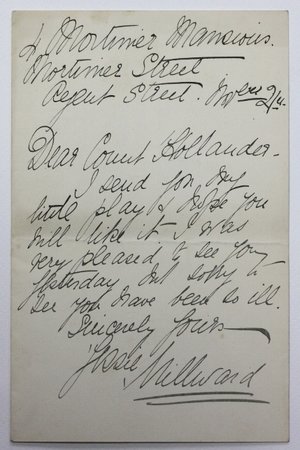 A one-page A.L.S from the actress Jessie Millward, dated November – possibly 2, 1911 - to Count Hollander, telling him that she is sending her 'little play.' Very good. Jessie Millward (1861 – July 13, 1932) was an English stage actress known for her performances both in Britain and the United States. Millward's father was Charles Millward, a successful writer of pantomimes of the 1860s and 1870s. She made her acting debut in 1881 in London, appearing with actor Henry Irving the following year, and performed many times with Irving's theatre company, mostly in Shakespeare, over the next three years, and occasionally thereafter, remaining friends with Irving. She performed for several years from 1890 at the Theatre Royal, Drury Lane. Millward became romantically involved with her frequent stage partner, William Terriss, who was murdered outside the Adelphi Theatre in 1897.