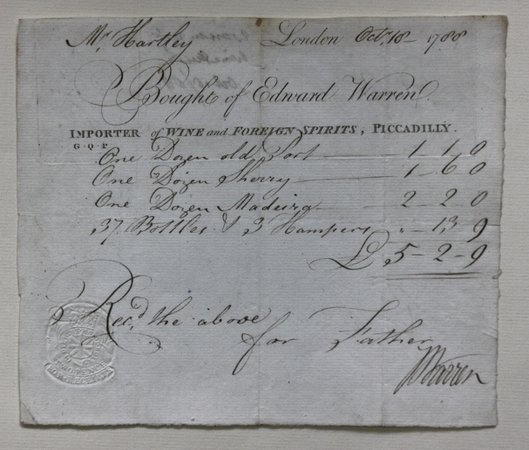 A printed bill from Edward Warren, importer of wine and foreign spirits...

1732. A printed bill from Edward Warren, importer of wine and foreign spirits, Piccadilly, for a substantial quantity of wine, made out to a Mr Hartley, whom we firmly believe to be David Hartley, the younger (1732 – 19 December 1813), statesman, scientific inventor, and the son of the philosopher David Hartley. He was Member of Parliament (MP) for Kingston upon Hull, and also held the position of His Britannic Majesty's Minister Plenipotentiary, appointed by King George III to treat with the United States of America. He was a signatory to theTreaty of Paris. Hartley was the first MP to put the case for abolition of the slave trade before the House of Commons, moving a resolution in 1776 that "the slave trade is contrary to the laws of God and the rights of men". Old crease-marks where folded; else very good. Oblong: 17.2 x 20.2 cm.