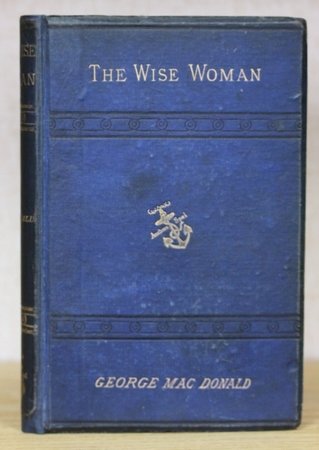 THE WISE WOMAN. A Parable.

London: Strahan & Co, 1875. Hardcover. No dust-wrapper. 222pp. Original decorative cloth gilt. Octavo. First edition. Re-backed, with the original spine laid down, but with some loss at head and foot of spine; some foxing throughout. Contained in a folding decorative calf-backed gilt box with star decoration to the spine. Inscribed at the head of the title-page: ‘Irene MacDonald from her father. Christmas 1875.’ Loosely laid in is a carte-de-visite of MacDonald, by Elliott & Fry, dated in pencil ‘Feb. 8 1873’. A very difficult title to locate, though sub-titled ‘a parable’, it is in fact a fairy story. This is the first copy we have handled. Shaberman 54. First issued in the United States under the title, A Double Story (1876). Re-issued in London in 1895 as The Lost Princess.