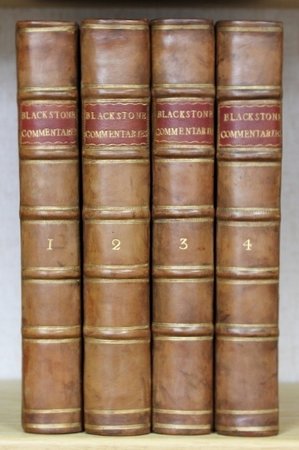 COMMENTARIES ON THE LAWS OF ENGLAND. In Four Books. By William Blackstone, Esq. Solicitor General to Her Majesty. The Fourth edition.

Oxford, Printed at the Clarendon Press, 1770. Four volumes. Folding Tables and one other plate in volume II. Quarto. Original calf expertly and finely re-backed by Charles Gledhill with red title labels to the spines. Ownership signature of S. Blachall to all front fixed endpapers. Some ink spotting to fore-edges; some spotting and water-staining to first four leaves to the outer margins of volume two; occasional light spotting in other volumes; else a very handsome set.