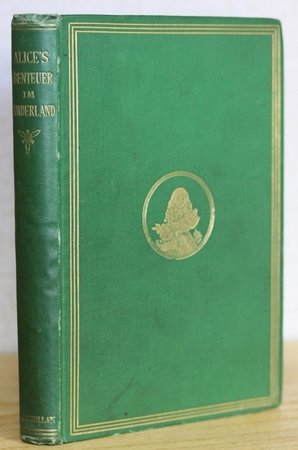 Macmillan und Comp, 1869. [12], 178, [2]pp. Original green decorative cloth gilt with medallion illustrations to upper and lower covers. All edges gilt.. Octavo. First edition. First issue. Slight wear to head and heel of spine; slight bubbling of cloth; hinges expertly repaired; else a very good copy of the scarce first issue, contained in a cloth, gilt clamshell box. Presentation copy, inscribed on front free endpaper: ‘W. H. Ranken, with the Author’s sincere regards march. 1869.’ Casson family bookplate. It is believed that this copy was once owned by the actress Dame Sybil Thorndike (Casson). W. H. Ranken (to whom A Valentine, the second poem in Phantasmagoria is addressed,) was a close friend of Dodgson’s at Oxford. He later taught English in Germany for a while. They visited Whitby together in 1854, and stories told to children by Dodgson on the shore at Whitby during the visit were thought by Ranken to have been the first germs of Alice in Wonderland. The first issue, which is by far the scarcer of the two, has the London: Macmillan imprint. The second issue, Liepzig: Johann Friedrich Hartknoch.