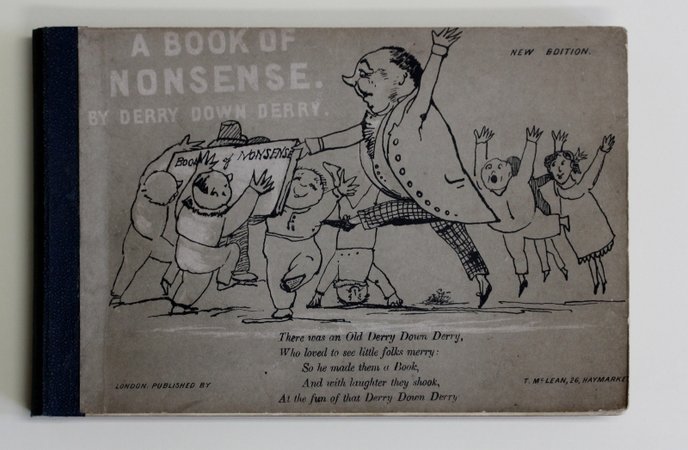 A BOOK OF NONSENSE By Derry Down Derry.

London: T. Mclean, No date [1855].(Inscribed 1856). Title and 72 leaves, each printed by lithography on one side only. Original pictorial semi-stiff covers, cloth-backed. Oblong octavo. Second edition. ‘There was an old person of Rhodes,’ and ‘There was an old person of Kildaire’ cropped at bottom edges, and some images slightly cropped at upper edge; some foxing; else a very good copy indeed that has been expertly re-backed and re-cased. An early repair to the endpapers has been left so as to retain the original endpapers with the near contemporary inscription. Rare. First published in 1846 in two volumes, only the first two editions were printed by lithography, wood-engraving being preferred for the third and subsequent editions. Both of the first two editions were small, possibly as few as 250 – 500 copies being printed. Even the third edition only numbered 1000 copies. The binding method for the first two editions was by the ‘perfect’ or gutta-percha method, and copies are often found in a distressed state, most probably lacking their original bindings and usually incomplete. The first two lithographed editions (the first edition and this, the second edition) include three limericks which were suppressed when Routledge issued the 3rd, wood-engraved, edition.