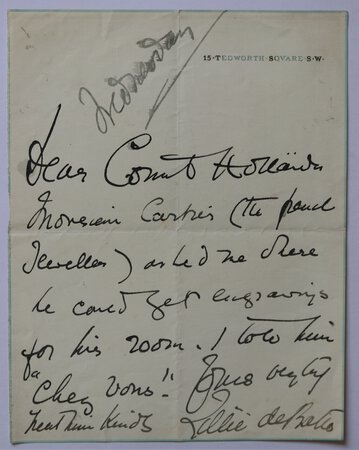 Undated, but circa 1900. Lillie Langtry, byname of Emilie Charlotte, Lady de Bathe, née Le Breton, also called (1874–97) Emilie Charlotte Langtry, (born Oct. 13, 1853, Isle of Jersey, Channel Islands—died Feb. 12, 1929, Monte-Carlo, Monaco), British beauty and actress, known as the Jersey Lily. She was the daughter of the dean of Jersey. In 1874 she married Edward Langtry, who died in 1897, and in 1899 she married Hugo de Bathe, who became a baronet in 1907. In 1881 Langtry caused a sensation by being the first society woman to go on the stage, making her first notable appearance at the Haymarket Theatre, London, as Kate Hardcastle in She Stoops to Conquer. For some time the critics did not take her seriously, but she became a competent actress, her most successful part being Rosalind in As You Like It. She also toured the provinces and the United States. She turned the old Aquarium Theatre in London into the Imperial Theatre, modelled on a Greek temple, and opened it under her own management in 1901. Her last appearance on the stage was in 1917. Lillie Langtry also maintained a successful racing stable at Newmarket. One of the most beautiful women of her time, she had many distinguished admirers, including the Prince of Wales, subsequently King Edward VII.