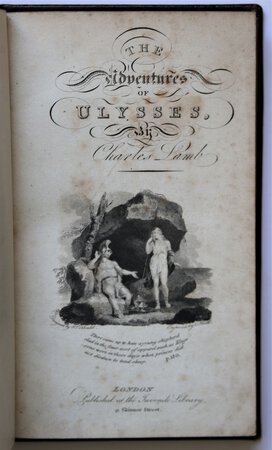 THE ADVENTURES OF ULYSSES, by Charles Lamb.

London: For the Juvenile Library, 41 Skinner Street, Snow Hill, 1808. vi, 203, [1 ad’] pages. Engraved frontispiece and separate engraved title with vignette. Twentieth century full calf with red gilt label to the spine. All edges gilt. 12mo. First edition. Some light spotting to the titles; else a very good copy. ] Charles Lamb’s The Adventures of Ulysses is an adaptation for children of Homer’s ancient Greek epic poem The Odyssey. ‘Ulysses’ is the Latinised name for ‘Odysseus’, the hero of the work. Lamb published the adaptation in 1808. Although later celebrated as an essayist, Lamb was also a prominent early 19th-century children’s author who, together with his sister Mary Lamb, had found success a year earlier with a similar work of adaptation titled Tales from Shakespeare (1807).