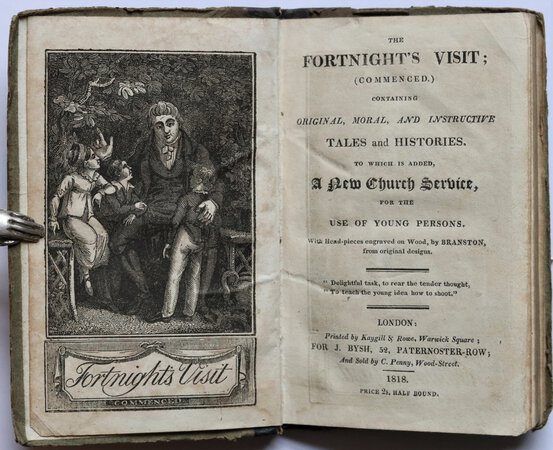 THE FORTNIGHT’S VISIT; (commenced.) Containing original, moral, and instructive Tales and Histories. To which is added. A New Church Service, for the use of young persons. With Head-pieces engraved on Wood, by Branston, from original designs.

London: J. Bysh, 1818. Price 2s, half bound. viii, 120 pages. Illustrated with a frontispiece and eight wood-engravings within the text, and one head and one tailpiece. Original quarter sheep over boards. 142 x 83 mm. First edition. Lacks front free endpaper; corners of boards knocked and worn; else a very good copy of a scarce title. Contains a story entitled ‘The Red Man’, about a First Nation American and his countryman’s struggle against the white man’s assumption of racial superiority and his sequestration of their lands. A sequel to this volume, called The Fortnight’s Visit; (concluded) is advertised as being ‘in the press’. Quite scarce.