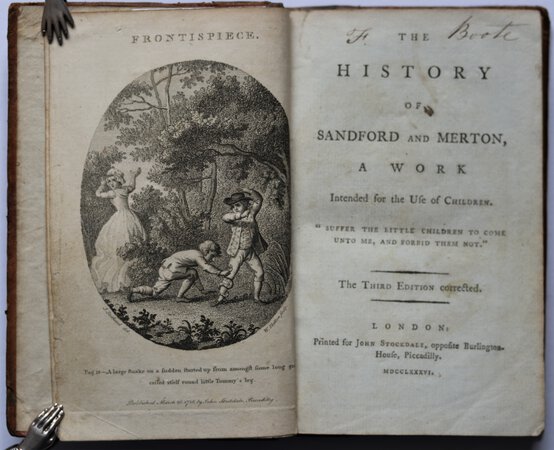 THE HISTORY OF SANDFORD AND MERTON, A Work Intended for the Use of Children. The Third edition Corrected.

London: John Stockdale, 1786. Three Volumes, each with an engraved frontispiece. Volume I: x, 281, [5 ad’s] pages. Volume II: [ii], 306, [4 ad’s] pages. Volume III: [ii],308, [4 ad’s] pages. The first volume of Sandford and Merton was published in 1783; the second in 1786, and the third in 1789. In this set, volume I is a third edition, volumes II & III are first editions. Contemporary sheep sometime re-backed. Volumes I & II bear the ownership names of Miss F. Boote. Volume I has the later ownership name of Alan Lubbock on the end-paper, and that of Elize Hodges on the blank verso of the title. There is a narrow area of water-staining to the fore-edges of the frontispiece to Volume III; the frontispiece to volume I has three short tears [3mm] to the fore-edge of the frontispiece. Otherwise, this is a very good early set of one of the most influential children’s books of the period.