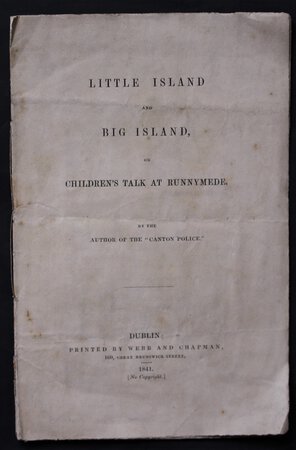 LITTLE ISLAND AND BIG ISLAND, or Children’s Talk at Runnymede. By the Author of the “Canton Police.”

Dublin: Webb and Chapman, 160, Great Brunswick Street, 1841. [3], 4 – 16 pages. 212 x 137 mm. First edition. Spine splitting; generally a little worn and title/wrappers lightly dust-soiled. Rare. No copies listed in Library Hub, and three copies only on Worldcat. The pamphlet, which is an attack on the British government’s treatment of Ireland, takes the form of a dialogue between a father and his three children.