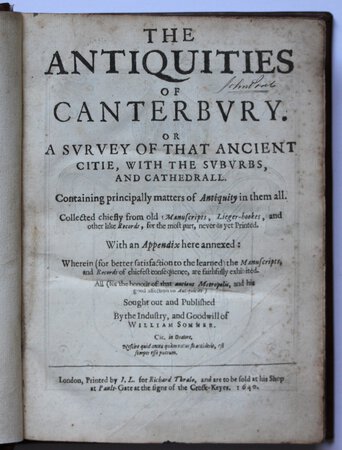 THE ANTIQUITIES OF CANTERBURY. Or a Survey of the Ancient Citie, with the Suburbs, and Cathedrall. Containing principally matters of Antiquity in them all. Collected chiefly from old Manuscripts, Lieger-books, and other like Records, for the most part, never as yet Printed. With a Appendix here annexed: Wherein (for better satisfaction to the learned) the Manuscripts, and Records of chiefest consequence, are faithfully exhibited. All (for the honour of that ancient Metropolis, and his good affection to Antiquities) Sought out and Published by the Industry, and Goodwill of William Somner.

London: Printed by I (John). L(egatt). for Richard Thrale, and are to be sold at his Shop at Paul’s-Gate at the signe of the Cross-Keyes, 1640. [16], 516, [12 Table], [1] errata] pages. Illustrated with a folding map of Canterbury by Hollar, and two other folding plates, plus a woodcut coat of arms of the See on the verso of the title. Bound in recent full calf gilt. 226 x 171 mm. First edition. Two small tears repaired in the inner margins of the two folding plates; small ink ownership name on title; occasional ink annotation to the blank margins; else an excellent copy of this the first history of the city Canterbury and the cathedral.