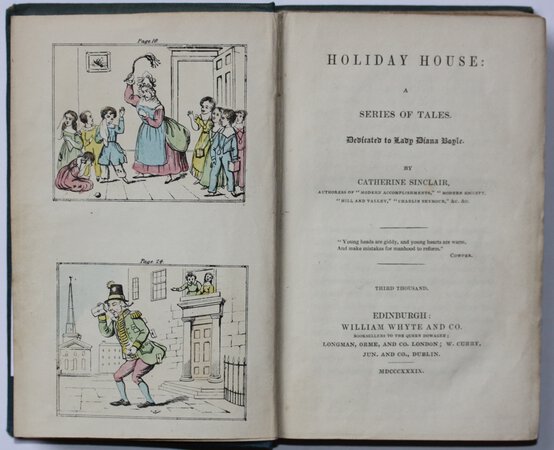 Edinburgh: William Whyte and Co, 1839. xii, 354 pages. Frontispiece and five other hand-coloured lithographed plates, each bearing two images. Original decorative cloth gilt. Front hinge cracked; one signature a little sprung; ex-libris Dr G. Bell with his bookplate and notes to the front fixed endpaper; presentation inscription on the endpaper from [possibly] a member of the Sinclair family; a very good copy of an extremely scarce book. The first two editions, each of a thousand copies, were not illustrated; there also exists a portion of the third thousand that is also unillustrated. This portion of the “third thousand,” which should really be designated a third edition despite there being no alteration to the letterpress, is the first illustrated edition, and it is unknown how many of the thousand copies that constituted the entire printing were issued with plates. Presumably the illustrated edition was more expensive, and therefore it should, strictly speaking, be designated a “de-luxe” edition. After this edition all printings were illustrated with only one plate as a frontispiece. It was not until the sixth edition of 1856 that the plates, now newly coloured-printed, were restored. The above edition is extremely scarce, as are all early issues. For a detailed bibliographical indexing of the editions, see Brian Alderson, Appendix II of ‘Childhood Re-collected.’ Holiday House, has often been cited as the first children’s book to portray children as being mischievous simply because they are children, and to be free from moralising. F. J. Harvey Darton, called it “certainly the best original children’s book written up to that time, and one of the jolliest and most hilarious of any period… It is the first example of real laughter and a free conscience.”