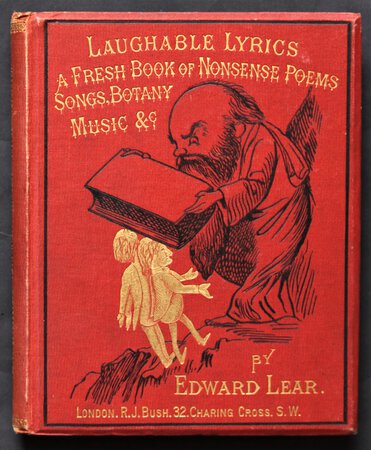 London: Robert John Bush, 1877. Inscribed on half-title, ‘Sydney Donald Edward Hall from his fondly loving Mama Christmas day 76.’) Illustrated in black and white by Lear. Red cloth pictorially stamped in black and gilt. Quarto. First edition. An unusually fine copy contained in a cloth slipcase. Containing 10 nonsense songs (The Dong with the Luminous Nose, Pelican Chorus and others), New Nonsense Botany and two Alphabets (5 and 6). At the foot of the first leaf of advert’s at the rear of the book is a listing for More Nonsense Pictures, Rhymes, Botany, &c., where the title is advertised as being in ‘fancy boards (only a few remain).’ Perhaps this is the binding on the above, though this does not explain why!