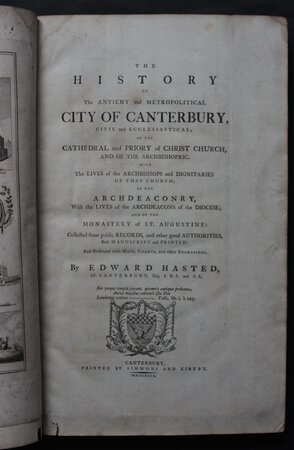 THE HISTORY OF THE ANTIENT AND METROPOLITICAL CITY OF CANTERBURY, civil and ecclesiastical; of the Cathedral and Priory of Christ Church, and of the Archbishopric. With the Lives of the Archbishops and Dignataries of that Church; of the Archdeaconry, with the Lives of the Archdeacons of the Diocese; and of the Monastery of At. Augustine: collected from public Records, and other good Authorities, bot Manuscript and Printed. And illustrated with Maps, Charts, and other Engravings. By Edward Hasted, of Canterbury….

Canterbury: Simmons and Kirkby, 1799. (4), iv, ii, 396, 20, (10 pages. Complete with all plates, including the plan of Canterbury which is often missing. Bound in later full calf gilt; marbled endpapers. Folio: 438 x 274 mm. A large paper copy. First edition. Small amount of insignificant worming to the very edge of the bottom blank margin of the first few leaves; some light spotting to the plates; some marking a scratching of the binding; lengthy gift inscription on one of the front endpaper from a wife to her husband, dated 1902; else a very good clean copy of a rare large paper copy of this scarce work. A bookseller’s notes on the end-paper states that there may have been as few as eight large paper copies only. A second edition in two smaller volumes was issued in 1801.