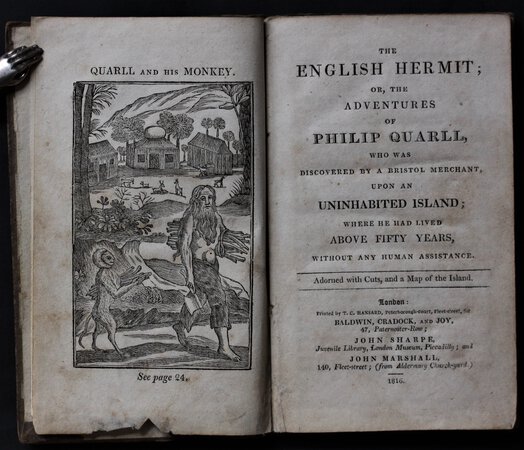 THE ENGLISH HERMIT; or, The Adventures of Philip Quarll, who was discovered by a Bristol Merchant, upon an uninhabited Island; where he has lived above fifty Years, without any human Assistance. Adorned with Cuts, and a Map of the Island.

London: Baldwin, Cradock, and Joy… John Sharpe…. John Marshall…, 1816. 84, 85 – 92 ad’s pages. Wood-engraved frontispiece, full-page engraved map; and wood-engravings within the text. Original paper-covered boards with a printed title-label to the upper panel. Spine expertly repaired. A very good copy. This work has been variously attributed to Edward Dorrington and Alexander Bicknell; however the Strongest contender for authorship resides with Peter Longueville. The British Library have an edition of 1727 with the initials P.L. on the title; and the Dedication as well as being signed Peter Longueville, contain a claim that the bookseller to whom Longueville gave the manuscript, substituted Dorrington’s for his own. [