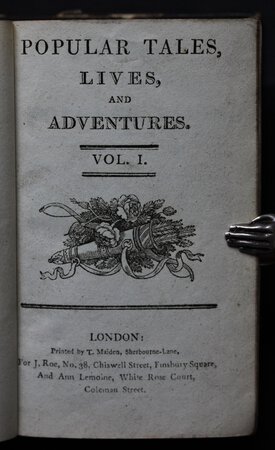 London: Printed by T. Maiden for J. Roe… and Ann Lemoine, No date [1805/6]. Four volumes of six, comprising Volumes 1 – 4, and numbering 32 chapbooks, each with a frontispiece and separate title-page and separate paging. In addition, each volume of the four volumes has a general title-page. Volume I: The Forty Thieves; or, the Story of Ali Baba and his Female Slave. The Shepherdess of the Alps. A tale by M. Marmontel. The Life and Unparalleled Voyages and Adventures of Ambrose Gwinett. The Black Palace; or, the Magician and the Giant. The Fisherman and the Genie. The Voyages and Adventures of Edward Teach, commonly called Black Beard. The History of Fair Rosamond. The History of Jane Shore. Volume II: The Singular History of Sir Simon Montford, the Blind Beggar. The Pathetic History of Crazy Jane. Fatal Curiosity; or, the Interesting History of Edward Wilmot. The Fish and the Ring; or, the Fortunate Farmer’s Daughter. Rugantino; or, the Bravo of Venice. William and Anna; or, the Triumph of Constancy. The Maid of Sicily; or, The Pirates. The Italian Lovers; or, The Mock Funeral. Volume III: The Water Spectre; or, Kitty o’ the Clyde. The History of Guy Fawkes, and the Horrid Conspiracy of the Gunpowder Plot. The Authentic History of the Gallant Life, Heroic Actions, and Sea Fights, of the Right Honorable Horatio Lord Nelson. The Sleeping Beauty in the Wood. Inkle and Yarico; or, Love in a Cave. The Life, Adventures, and Glorious Sea Engagements, of the brave Admiral Blake. The Hunter of the Alps. Albert of Werdendorff; or, the Midnight Embrace. Volume IV: The Travellers; or, Prince of China. The Younger Brother; or, the Sufferings of Saint Andre. Ellen of Eglantine. The Royal and Noble Lovers; or The History of the Great Earl of Essex, and Queen Elizabeth. The Deserted Son; or, a lesson for Ladies. The Grecian Hero; or, Life and Heroic Actions of George Castriot. The Lost Daughter. The Magician and the Robbers; or, The Astrologer’s Prediction. Most are 36 pages. Four volumes bound as two, in half sheep over marbled boards. 127 x 90mm. Bookplates to both front pastedowns; front hinge cracked to volume I, but firm; very occasional printed monogram to blanks or borders; some occasional dust-soiling an light staining; else a very good part set. Each individual chapbook would at some point have been issued separately. Rare. Library Hub lists Opie Collection copy only, and only the first four volumes only, as above.