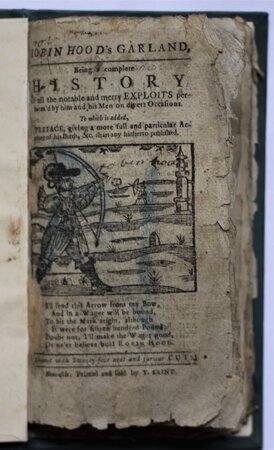 ROBIN HOOD’S GARLAND, being a complete HISTORY of all the notable and merry Exploits perform’d by him and his Men on divers Occasions. To which is added, Preface, giving a more full and particular Account of his Birth &c. than any hitherto published. Adorned with Twenty-four neat and curious CUTS.

Newcastle: Printed and Sold by T. Saint, No date [1771]. 84 pages. A chapbook now bound in plain untitled paper-covered boards. 12mo. Illustrated with a woodcut to the title-page, and twenty-six cuts within the text. Fore-edges worn throughout – the first two leaves particularly so; also the first two leaves have been restored at some point but have some loss of text and a small loss to the woodcut on the title; also some occasional ink annotation. However, this is a rare printing as neither Worldcat or ESTC record printings by Saint.