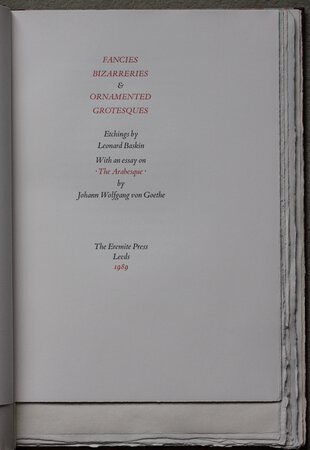 FANCIES BIZARRERIES & ORNAMENTED GROTESQUES. Etchings by Leonard Baskin. With an essay on the Arabesque by Johann Wolfgang von Goethe.

The Eremite Press, 1989. Number 33 of an edition of 35 copies in total. Numbers 1-3 have two extra suites, one hand-coloured by the artist and the other in different inks on different papers. Numbers 4-8 have the second suite of etchings as an extra. Copies 9-35 comprise the regular edition. Unpaged. Text leaves and 24 etchings with tissue guards each numbered and signed by Leonard Baskin. Binding by Gray Parrot & Co. Half red morocco over marbled boards with a shaped leather label, titled in gilt, to the upper board, and a shaped grey gilt label to the spine. Contained in a clamshell box of similar design, being half black morocco over black cloth, with shaped red gilt label to the spine. Folio. Mint. The Gehenna Press The Work of Fifty Years 1942 – 1992. Pages 105-6.