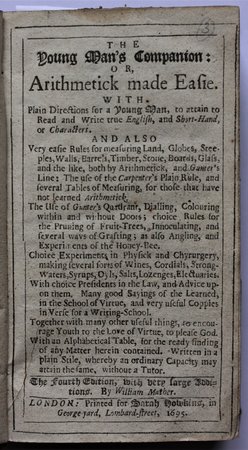 THE YOUNG MAN'S COMPANION: Or, Arithmetick made Easie. With plain directions for a Young Man, to attain to Read and Write true English, and Short-Hand or Characters. And also very easie Rules for measuring Land, Globes, Steeples, Walls, Barrels, Timber, Stone, Boards, Glass, and the like, both by Arithmetick, and Gunter’s Line: The use of the Carpenter’s Plain Rule, and several Tables of Measuring, for those that have not learned Arithmetick. The use of Gunter's Quadrant, Dialling, Colouring within and without Doors; choice Rules for the Pruning of Fruit-Trees, Innoculating, and several ways of Grafting; as also Angling, and Experiments of the Honey-Bee. Choice experiments in physick and Chyrurgery, making several sorts of Wines, Cordials, Strong-Waters, Syrups, Oyls, Salts, Lozenges, Electuaries. With choice Presidents in the law, and Advice upon them. Many good Sayings of the Learned, in the School of Virtue, and very useful Coppies in Verse for a Writing-School. Together with many other useful things, to encourage Youth to the Love of Virtue, to please God. With an Alphabetical Table, for the ready finding of any Matte herein contained. Written in a plain Stile, whereby an ordinary Capacity may attain the same, without a Tutor. The fourth Edition, with very large Additions. By William Mather.

London: Printed for Sarah Howkins, in George-yard, Lombard-Street, 1695. [20], 464, [3ad’s], [1 blank], [4 Postscript] pages. Folding engraved map, 2 engraved plates (one folding), many diagrams and illustrations, folding table. Occasional light spotting, contemporary mottled calf, small splits to joints, light edge wear, 12mo, contained in modern cloth clamshell box. Rare. ESTC records two copies only, both in the United States. £ William Mather, grandson of a mayor of Hull, was born in Bedford. He was a churchman, but about 1661 he and his wife joined the Quakers. He became a teacher and kept a private school in Bedford. He also held an appointment as surveyor of highways and wrote a pamphlet ‘On Repairing and Mending the Highways,’ 1696, in which he is described as ‘late surveyor.’ Mather's chief work, ‘The Young Man's Companion,’ published 1681 (no copies listed in ESTC), contains, in very small compass, information on nearly every practical subject, including a treatment for breast cancer. It became extremely popular and ran through twenty-four editions. To the fourth edition, 1695, are added some verses, and fourteen chapters written by Mather's son Samuel, a clever young man, who died at the age of twenty-two.