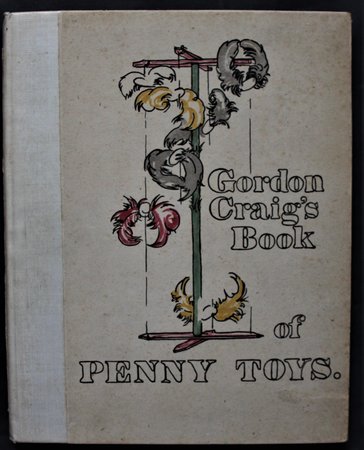 London: Lamley and Co, 1899. No 136 of 550 copies (actually about 250) of this hand-coloured edition. Title with partly colored woodcut; 20 hand-coloured wood engraved plates; and many other woodcuts coloured by hand. Original quarter buckram over hand-coloured pictorial boards; mounted title label to spine. Quarto. Tipped in the are prospectus, which has two hand-coloured woodcuts. Pickford Waller’s copy with his bookplate, designed by Osmund Spare, to the front paste-down. Some light foxing; couple of short marginal tears; else an excellent copy of this rare book. The son of Ellen Terry, Gordon Craig had been a highly successful young actor before being introduced to woodcutting by the artists James Pryde and William Nicholson. According to Benezit, his Book of Penny Toys ‘is now recognized as a significant landmark in the development of British book design.’ The artist himself made the strange decision to destroy 250 of the 500 copies to avoid the chore of colouring. In fact, he only coloured about 100 of the surviving 250 before passing the remaining sets to Jess Dorynne who completed the colouring for the printer.