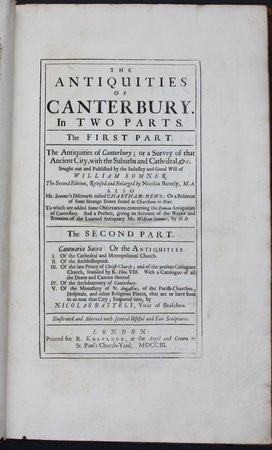 THE ANTIQUITIES OF CANTERBURY. In Two Parts. The First part. The Antiquities of Canterbury; or a Survey of that Ancient City, with the Suburbs and Cathedral, &c. Sought out and Published by the Industry and Good Will of William Somner. The Second edition, Revised and Enlarged by Nicolas Battely, M.A. Also Mr. Somner's Discourse called Chartham-Mews: or a Relation of some Strange Bones found at Chartham in Kent. To which are added some Observations concerning the Roman Antiquities of Canterbury. And a preface, giving an Account of the Works and remains of the learned Antiquary Mr. William Somner, by N.B. The Second part. Cantuaria Sacra: or the Antiquities I. Of the cathedral and metropolitian Church. II. Of the Archbishoprick. III. Of the late Priory of Christ-Church; and of the present Collegiate Church, founded by K. Hen. VIII. With a Catalogue of all the Deans, and Canons thereof. IV. Of the Archdeaconry of Canterbury. V. Of the Monastery of St. Augustin; of the parish-Churches, Hospitals, and other religious Places, that are or have been in or near that City; Enquired into, by Nicolas Battely, Vicar of Beaksborn. Illustrated and Adorned with several Useful and Fair Sculptures.