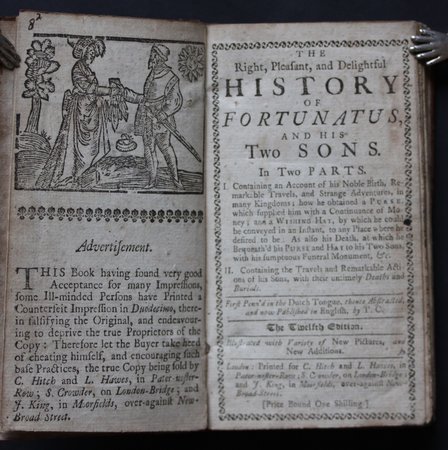 The Right, Pleasant, and Delightful HISTORY OF FORTUNATUS, and his Two Sons. I. Containing an Account of his Noble Birth, Remarkable Travels, and Strange Adventures, in many Kingdoms; how he obtained a Purse which supplied him with a Continuance of Money; and a Wishing Hat, by which he could be conveyed in an Instant, to any Place where he desired to be: As also his Death, at which he Bequeath’d his Purse and Hat to his Two Sons, with his sumptuous Funeral Monument, &c. II. Containing the Travels and Remarkable Actions of his Sons, with their untimely Deaths and Burials. First Penn’d in the Dutch tongue, thence Abstracted, and now Published in English, by T.C. The Twelfth Edition. Illustrated with a Variety of New Pictures, and New Additions. [Price Bound One Shilling.]

London: C. Hitch and L. Hawes…, No date [circa 1758]. 168 pages. Illustrated with a leaf at the front that bears the half-title and a large wood-engraving, with an ‘Advertisement’ on the verso and a smaller wood-engraving, plus another 15 woodcuts within the text. Contemporary sheep that has been re0caked and titles on the spine. 12mo. 148 x 85 mm. Some leaves trimmed close to the text, five with slight loss of some letters. Else a very good copy.