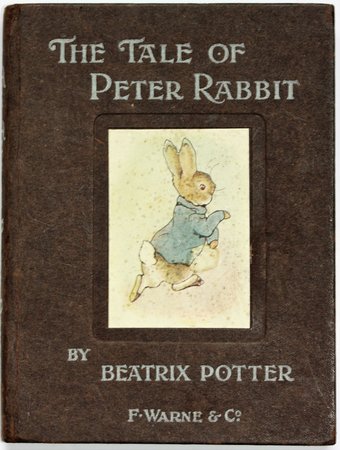 THE TALE OF PETER RABBIT.

London: Frederick Warne and Co, No date. (1902.). First trade edition. First issue, with brown boards and "wept big tears" on page 51. Leaf-patterned endpapers. This first published edition contains the first appearance of coloured illustrations, and there are four colour plates which appear in this first issue but which do not appear in later printings, including the cover illustration of Peter in his blue jacket and the image of Mrs McGregor (Beatrix Potter) carrying a pie on page 14. Ownership inscription dated 1903 to the verso of the front free endpaper; some light spotting and a small rub to the pictorial pastedown on the front panel; else a very good, clean copy of this classic. Contained in a morocco-backed gilt folding box. Very scarce in this condition. Quinby 2. The first trade edition, which is thought to have had a print run of 10,000 copies, of which 2000 were bound in cloth and sold as a de-luxe edition, was proceeded by two privately printed editions of 250 copies and 200 copies only. The first trade edition in nice condition is rapidly becoming very difficult to find.