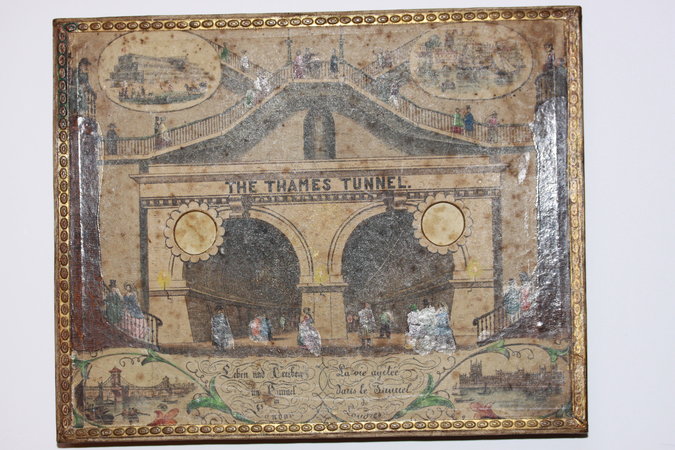 No imprint, but German: Circa 1851. Accordion-folding peepshow, with four cut-out panels. The front-face, measuring 17.5 x 22 cm, forms the lid to the shallow cartonnage box containing the peepshow. The peepshow expands by paper bellows to approximately 76 cm. The lithographed scenes are hand-coloured. Four vignettes on the front-face show the Great Exhibition Building, the Hungerford Suspension Bridge, the Houses of Parliament, and the Tower of London. The two peep-holes show the Wapping entrance to the Tunnel with views along the Western and Eastern Archways. Within the Tunnel can be seen many foreign visitors, some walking, some shopping at various counters that have been set up for trading. Box restored at edges; else an excellent example of a particularly colourful and attractive Thames Tunnel peepshow. See Hyde 177. Very scarce.