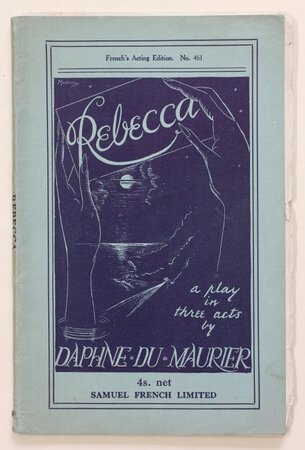 REBECCA A Play in Three Acts.

London: Samuel French Limited, No date. 93 pages. Original pictorial blue covers, bearing the price 4s. Spine a little worn; else very good. First published as a play in 1939 – this, presumably a later printing. Loosely laid in is a four-page programme of the production put on by the Dover Players. Also there are two letters from the producer, Janet Young, to a Mr Pain, negotiating with him to play the part of Giles Lacy. However the printed cast list shows the Producer's husband, Malcolm Young, as playing the part. Spine a little worn, and the programme also to the outer edge, else very good.