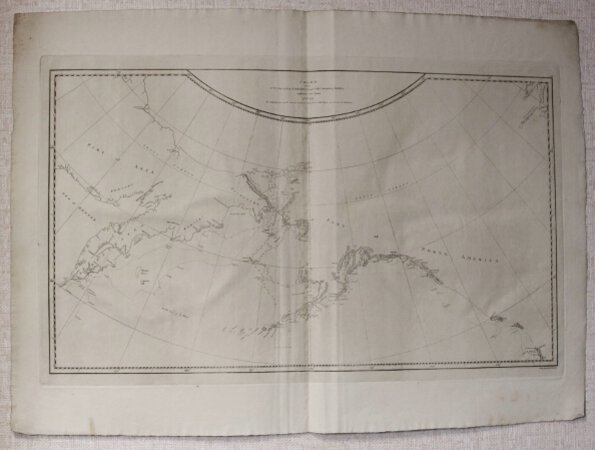 CHART of the N W COAST of AMERICA and N E COAST of ASIA explored in the Years 1778 & 1779. The ushaded parts of the Coast of Asia are taken from a M S Chart received from the Russians. Writing engraved by T. Harmer. [Copied by Lieut. Henry Roberts.]

[1784.]. Sheet size: 55 x 76 cm. Plate mark: 42.2 x 69 cm. Uncoloured as issued. Centrefold as issue in the Atlas volume of Cook, James. A Voyage to the Pacific Ocean. Undertaken, by the Command of His Majesty, for Making Discoveries in the Northern Hemisphere, to Determine the Position and Extent of the West Side of North America; Its Distance from Asia; and the Practicability of a Northern Passage to Europe. Performed under the Direction of Captains Cook, Clerke, and Gore, in His Majesty’s Ships the Resolution and Discovery, in the Years 1776, 1777, 1778, 1779, and 1780. Published 1784. An excellent example with wide margins.