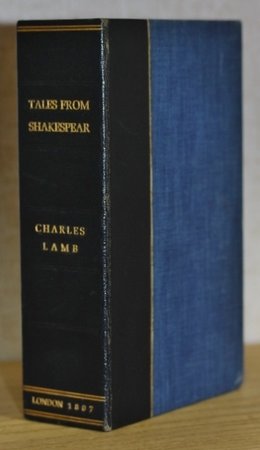 TALES FROM SHAKESPEARE. Designed for the Use of Young Persons. Embellished with Copper-Plates.

London: Printed for Thomas Hodgkins, at the Juvenile Library, 1807. Two volumes. First edition. First issue. [The first issue has the printer’s details on the verso of the last leaf of text in volume I.] Volume I: ix, [1 blank], [1 contents], [1 blank], 235, [1 blank], [4 ad’s] pages. Volume II: [4], 261, [3ad’s] pages. Illustrated with a total of twenty engraved plates. Bound, probably in the early twentieth century, by Wood of London in a Art Nouveau style binding in full Levant morocco, with elaborate gilt tooling and decoration to the spine and corners of the boards. Top edges gilt. Enclosed in a solander box with a gilt-lettered morocco spine. A superb set of the rare first issue. It was not until the sixth edition that the name of Mary Lamb appeared for the first time on the title-page, despite the Tales being mostly her work. In several of the subsequent editions it is omitted again. The illustrations, which it has often been suggested are by William Blake, are much more likely to be by the young William Mulready who was responsible for much of the illustrative work at the Juvenile Library.