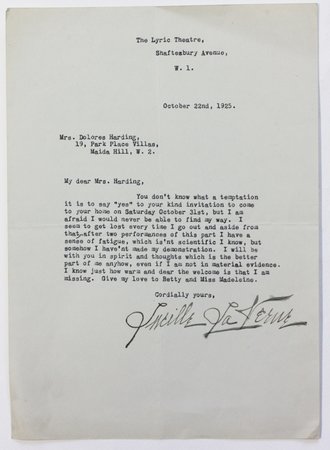 A T.L.S. from the actress Lucille La Verne (November 7, 1872 – March 4, 1945) to Mrs. Dolores Harding, dated 1925 and addressed from The Lyric Theatre, Shaftesbury Avenue, declining her invitation to visit, explaining that, 'I would never be able to find my way. I seem to get lost every time I go out…' Lucille La Verne (November 7, 1872 – March 4, 1945) was an American actress known for her appearances in silent, scolding, and vengeful roles in early colour films, as well as for her triumphs on the American stage. Her best known part is that of the voice of the Wicked Queen, and the old crone from Disney's 1937 Snow White and the Seven Dwarfs.